We had tendencies to give excuses of our weakness and failures, like I am too old, I don't have money to start business, I had failed a lot of times. I had these handicap or that etc.
Read some of the incredible experiences of turning all their obstacles into great successes.

You might think that you had failed lots of time.

Joe Girard, who changed 40 jobs, mostly been fired. When he was young he frequently got scolding and beating from his father. Later he found his niche as a car saleman . He able to turn this 40 failures into his futures success, with an all time record by selling 13,000 cars and become the world greatest saleman.http://www.joegirard.com/joegirardbio.html

If you think that you are too old and no money . Take a look at this incredible story: 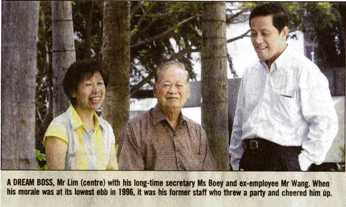 At the age of 72 years old, Lim Tow Yong was declared a BANKRUPT. The company he founded in the 1960s, Emporium Group Holdings which he built up to a sales revenue of $300 million has been crippled by the recession of the mid-80s and severe competition. His company chalked up debts of over $100 million.

Most people at the age of 72 would either be dead or half-dead. Instead of feeling sorry for himself, he picked himself up decided to START ALL OVER AGAIN at the age of 72. He began going back into the retail business by setting up joint ventures with partners in Sabah, Labuan and Brunei.

Ten years later, at the age of 82, he sold his 17 stores and supermarkets for $4.2 million making him a millionaire all over again!

Subsequently hold a feast to thanks all his employees, who stand behind him, in all those difficult years.

Reported by Straits Times. Emailed to me by Adam Khoo.

Franklin Delano Roosevelt was a polio victim. He conducted his successfully all his campaigns from a wheelchair. And lead his country through numerous crises.http://www.whitehouse.gov/history/presidents/fr32.html