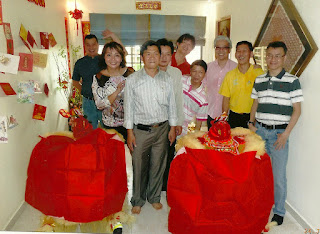 I met Lee Song at Bugis after many years, which I lost contact with him. We used to stayed in the neighborhood area. He asked me to come to his home for the class reunion, which his class E4-4 had been holding every year.

My class class E4-2 had since stopped holding class reunions for many years.

At Lee Song home which he invited the lion dance troupe to his home to perform.

I met back some of the classmates where we  where split into different classes  from  sec 2 going into sec 3 - arts, metalwork, electronic & woodwork class etc.

I was in the arts class, I was not qualified to go into the technical classes by one points. Because I never passed up  2 technical projects for evaluations to the teacher.

I reached there around 1pm started our dailogues in his room around at 2, some brought their wives there one brought his mistress. Many of them hair growing white.

Mike is my classmate since 1967 still in contact, came around 3pm something and brought his swedish wife and his son around 1 year old.

Maybe Xiang Yun the mediacorp actress is our  classmate it is possible that 3 us were in the same school or class?

We adjourned and dailogued outside the house. Lee Song kept bringing food - crackers which he specially brought from M'sia, abalones and beer to treat us.

Later the brother of Henry Tan our schoolmate who invented the thumbdrive and other patents came, I had a brief dailogue with him and  called it a day.

What an incredible karmic  & mystical reunion after 35 years, for our classmates from different classes  to come together again.

Posted by Henry Leong at 8:39 PM No comments: