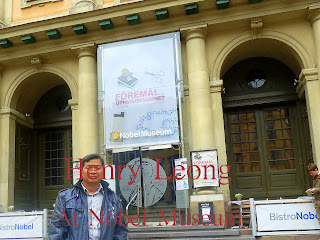 http://news.bbc.co.uk/2/hi/country_profiles/1021823.stmhttp://www.sweden.se/eng/Home/Education/Research/Facts/The-Nobel-Prize/
Highly successful people usually started early in their life in their chosen field of endeavors. They are likely to have a influential figure as their models of success. The persons are likely to be their close relatives.

Bill Gates father is a banker. Warren Buffret father is a remisier. Maradona grandfather gave him a football as a present at his one year old birthday. Michel Platini's father built a football field model for him to practice his freekicks.

With the highly prestigious Nobel Prizes given to the carefully selected winners from around the world in 6 categories ( Physics, Chemistry, Physiology or Medicine, Literature and Peace awarded in Norway and Sweden) Each prize is worth US $1.5 million and there might be joint winners.

Children  look for role models to follow. With the regular broadcasting of the Nobel Prizes ceremony and the winners flying every year to collect their prizes in Sweden, which in turn inspire the many Swedish children to set aim to achieve the Nobel Prizes.

It not surprise that Sweden with a such a small population of only 9 million people able to produce many giants like Ikea, Volve & Scania etc http://swedishstartups.ning.com/forum/topic/show?id=2024928%3ATopic%3A9565

A person may invent something, it take a innovator like Henry Ford or Steve Job to improve on it and make it a best seller.

Posted by Henry Leong at 7:54 PM No comments:

Constructions entail noise pollutions and the requirement of technical manpower.

With dwindling birthrate and parents not so encouraging their children to go into the industry.

Will more incentives need to encourage the innovations and usage of factory make building materials?

What types of incentives need to overcome the future shortages of manpower? Which Singapore could face severe manpower crunch for the industries in the future.

Having been in the manufacturing industries for the better part of working life.

Factory make building materials could lower the cost and increase the efficiency of the buildings.


http://www.cif.org/innovation.php
Posted by Henry Leong at 8:46 PM No comments: