http://howtooptimizeyourequipments.blogspot.com/
Posted by Henry Leong at 8:53 PM No comments:

1. On the way to Botanical garden, 2. Stunning Singapore River, 3. Beautifu patterns of the sky, the clouds are drawings, 4. Sunset, 5. A street off Ximenting, 6. Taipei 101, 7. The Espanade, Theatres on the Bay, 8. Las Vegas intergrated resorts

http://bighugelabs.com/flickr/scout.php?username=&sort=date&page=1&makeimage=1
Posted by Henry Leong at 9:47 PM No comments:

My video recording of the world tallest building

http://rivers-seas-canals.blogspot.com/
Posted by Henry Leong at 11:28 PM No comments:

My photo was featured in Now Public.Com

My photo was featured by Ms Kaitlin Manager of Now Public.Com, in her 'Best Cities of the World Survey' and my reply to her:http://www.flickr.com/photos/henryleong/403450636/http://rivers-seas-canals.blogspot.com/
Posted by Henry Leong at 9:46 PM 1 comment: 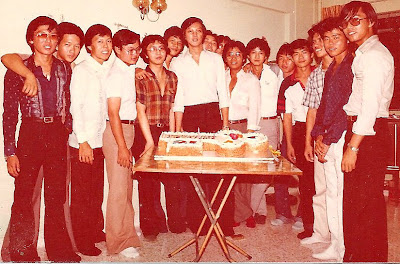 My classmates at Upper Aljunied Technical School, used to get together to help each other to introduce girls to each other in the parties. The whole group successfully married in their teens.

At that time birthday parties are popular. See Photo
Posted by Henry Leong at 8:38 PM No comments: 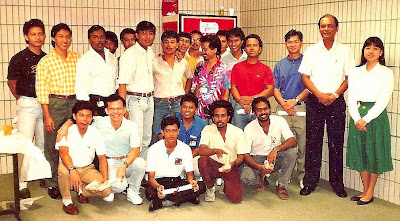 After our work at Genting Lane the News Centre, four of us would took a cab to Jurong for our Nitec Course.

A colleague who just came back from the honeymoon was asked by the instructor, what is the squeeze pressure between the printing cylinder and the blanket.

The person was in a maze and can't answer. The instructor said you just came back from your honeymoon and don't know how much is the squeeze pressure. Everybody laughs.
Posted by Henry Leong at 8:09 PM No comments:

The most bicycle friendly nations in the world

Take a look at this interesting photo:
http://blog.wired.com/cars/2007/11/where-are-the-m.html
Posted by Henry Leong at 8:01 PM No comments:

I read the interesting articles by East Coast Life. With today society were many older workers got difficulties in finding meaningful jobs.

It is a good idea to develop intensive farming.

Some of them maybe sent to Japan for intensive training. As Japan had the most well paid cleaners, why not Singapore had the most technological advance farming technicians or farms in the world.

The farm should locate near the biopolis or West Coast as most of the biodiversity scientists and higher institutions are there. Singapore had the advantage of having lots of land near the sea.

With the $15 billions biopolis nearby, the chance of breakthrough and export some of the cultivations is very high.

Thailand had successful built their prawn farms. Which I found very tasty. Japan able to grow water melons that sell many times the values of normal water melons. This are some example of the benefit of intensive farming.

So Singapore can diversified it food sources and not so dependent on other countries for its food.

As more careers were created in the outskirts areas, so it will lessen the congestions in the city area.

I think this idea is worth serious considerations.
Posted by Henry Leong at 7:21 PM 1 comment: