My fascinating river adventures in various part of the world

When I was young was intrigued by the story of Tom Sawyer riding a raft down the Mississippi River in Mark Twain's book.

I had numerous close calls in my made shift rafts rides, which could had drown me. Some children were drown in the canal behind my flat at Mattar Rd. After raining, the man made canal will swell rapidly and the current were very swift.

Recalling those rides would sent shivers down my spine. Fortunately, my fast reactions usually saved the day. I am able to latch on to something last minute that kept me from been swept away by the rapid current.

We would latched on wooden planks that we tied them together like a raft or large pieces of floating wood and try to navigate it down the stream using a pole to steer it.

Reminiscent of those day that I spent hours trying to catch fishes, along the long stretches of the canal.

If I looked back I had been playing in the stream so many times, how lucky am I not to been swept away. The water level can easily reach two metres deep if it rain heavily.

Later I had many wonderful trips on a boat to different parts of the world.

Recalling my fascinating trips to the Batam kelong. It was possibly my happiest experiences. Because of the very captivating sunrise and sunset. Freshly caught seafood were served with Indonesian spices.

I used to like stilt houses built around the sea and the sun. 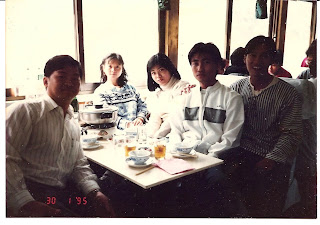 One of my favourite trip which I enjoyed very much was the trip at the Lijiang river. I got to know some wonderful friends and subsequently we had many more wonderful outings after the trip.

We had a nice steamboat lunch, serve with fresh yummy seafood and Tsingtao beer. What a nice combination chitchatting with friends in a slow ride down the river watching such captivating scenery. Lijiang is China second most visited tourist spot. 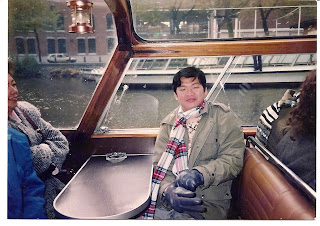 The boat ride in Holland was an exciting one. Their Heineken beer were stronger than what had in Singapore. After some drink I got tipsy.

Down the river we can watch the rows of beautiful & colourful houses. It's interesting to note that they used to put a pulley system at the top of the building to move and remove their heavier furniture through the window. And many behind their cars, there were usually a hook.

The boat ride through the Florentine, Italy was 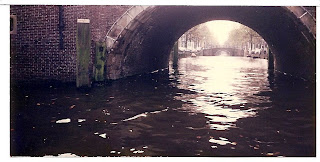 somewhat the tightest among all my trip, it was such a thrilling adventure that the boat captain had a hard time, trying to avoid knocking into the sides of the bridges the river which was quite fast after the rain.

The London boat trip is quite exciting, there were rows of interesting Parliaments houses and castles along the sides of the river. The houses were typical old European style types of houses.

The boat trips from Hong Kong to Guangdong were as exciting, the first time I had experience riding on a hovercraft. A vehicle that float on the water and uses cushions of air underneath it to propel it forward.

The hilarious part of the ride was the movie shown on the hovercraft, featuring famous Hong Kong artiste Tien Niu and Eric Tsang making love. Tien Niu requested a condom, Eric Tsang misinterpreted it as a bag. The moral of the story is to use condom when making love. 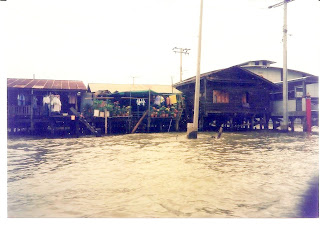 Along the Chao Praya river, we noticed the owners decorated their houses with beautiful pots of flowers on the edges of the their stilt houses and numerous river boats, rowed toward our boat to peddling all sorts of goods.

The Colorado Cruise were very cold and windy nevertheless I enjoyed the trip.

An interesting river cruise on the Rhine River between Swiss and Germany. O 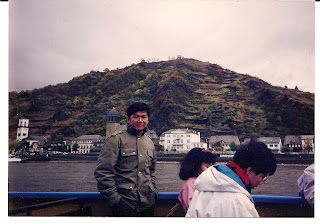 n the way we seen numerous beautiful castles. In between I saw a beautiful and rapid waterfall. 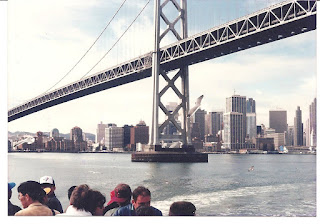 My trip to Selat Panjang, an Indonesia island to court my wife was somewhat the my longest boat trip and a romantic one. Transit from Singapore to Batam island took 45 minutes and another boat to it about 3 and the half hours afterward. At that time it was raining heavily.

When I reached there I was very touched to find that my wife sister-in-law was waiting for us for more than one hour because of the delay.

It was raining. The cool breeze is blowing against us. I always like the cool sea breeze. I was usually standing behind the boat, when it moved forward, the resistance causes the water beating against me.

It was Chinese New Year and it took us 3 days to visit all my future wife's relatives and friends. It was very romantic sitting beside my future wife in a trishaw (a form of tricycle for hire).

Along the way there we spotted lots of gigantic oil drilling structures and beautiful kelongs.

At the LA Disneyland it was somehow a totally different experience. We enjoyed the assisted submarine ride watch various colourful creatures.